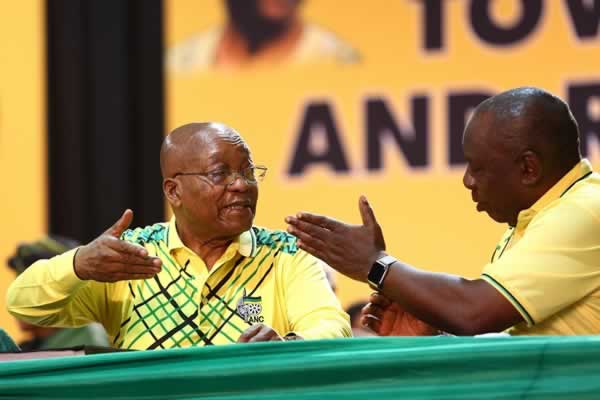 The ANC says it does not see a need to be dragged into the now public speaking notes that former president Jacob Zuma used when he met with the Top 6 early last month.

While the notes have outraged others, the governing party’s national spokesperson, Pule Mabe, said they met with Zuma and thereafter publicly communicated the outcome of the meeting, which appeared to have been tense.

Mabe’s assertion comes as the notes by Zuma have been leaked to the public and caused a sensation as he made some serious allegations against party leaders like Cyril Ramaphosa and Inkosi Mandla Mandela, among others.

“The ANC through the secretary-general (Ace Magashule) communicated the outcome of the meeting with former president Zuma. We accounted both to the media and the public, there is no need to interrogate the matter again,” Mabe said when Independent Media asked him whether they would probe who leaked the notes and with what intention.

While Mabe claims that Magashule dealt with the matter, the notes paint a different picture to what Magashule said when he called an impromptu press conference on the evening of March 8.

Magashule claimed that they agreed that Zuma should be given space to deal with his stand-off with the Zondo commission and the Constitutional Court.

“The Top 6 heard his explanation and agreed to give him space to continue consulting with his lawyers on these issues, which he actually raised, whether to appear before the state capture commission … We have left that matter because he will further consult with his lawyers,” Magashule had announced.

Now it appears that Zuma told the Top 6 to allow him to face the battle alone and in his own way because he believed that some of his comrades had sold him out.

“Cosatu is not interested in this rewriting of history. We do not want to discuss issues of people who suffer from a persecution complex or a victim mentality. We are busy struggling to save the jobs of the real victims, workers who are losing jobs and salaries from many SOEs where Comrade Zuma’s friends, the Gupta family, left their corrupt fingerprints.

“Comrade Zuma served in the Presidency of the Republic for 15 years (six years as deputy president and nine as president). A little bit of introspection on his part will go a long way to answer some of his questions,” Pamla said.

Among the people Zuma believed had sold him out in the notes are Ramaphosa, for cutting the funding for his corruption case, and Inkosi Mandela for allegedly going to Qatar to plead with Zuma’s foreign allies to distance themselves from him (Zuma).

“Notably, Mr President, you decided to let me deal with the personal cost order without your support. It cannot be suggested that you did not know that your decision would prejudice me.”

Against Inkosi Mandela, Zuma said his behaviour was aimed at strangling him.

Zuma claimed that Mandela went to the oil-rich Kingdom of Qatar to plead with the Emir there to stop supporting Zuma.

“I must also add, comrades, that some of you have followed me abroad to talk to people and media and my friends that I know, to plead with them that they must not support me. And some of those are my friends, and they have told me. That proved the point that it is not an accidental behaviour. Just to quote one, so that you don’t say I am just making allegations for sweet nothing.

“I went to Qatar and the first issue my friend, the Emir, … told me that your country has been sending messages to say that I must not meet. And that very morning Mr Mandla Mandela was there, having been given a special jet to fly there to try to stop the Emir not to meet with me. It came from his mouth, not me,” Zuma claimed.

Independent Media approached Inkosi Mandela for comment and he did not respond at the time of going to print.