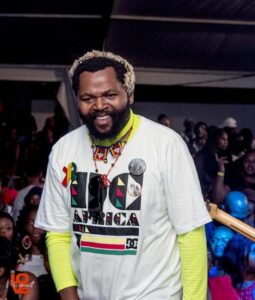 Musician Sjava‘s life has been quiet ever since Lady Zamar accused him of rape. Well, it seems he has slowly come back into the spotlight. The singer who is currently in eHostela posted a rather cozy picture of him and his costar Andy Mnguni. It is basically them smiling and looking into each other’s eyes. He captioned the picture with a heart.

Fans of course had questions for the two but Sjava didn’t give away any information.

Just a few weeks ago a lady came on a bit too strong for Sjava when she promised to delete her Twitter account if he were to reject her, as she desperately wanted to be with him. Well the muso did not exactly let her down when he responded by saying “ihaba” which translates to ‘what an exaggeration.’

Women making a move and hitting on him is not a new thing and even after the woman made her move at him, more expressed their interest.

But the women don’t really stand a chance with Sjava as he might have a new woman in his life. He shared a snap of a lady on his Instagram account but decided to cover the lady’s eyes and captioned the picture with a heart emoji, leaving room for speculation. The lady was in bed and was even wearing a custom-made top with Sjava’s face on it.

The award-winning artist’s love life is often scrutinized following the rape accusations he faced when his ex-girlfriend Lady Zamar opened a case of rape against him, for an incident that allegedly took place back in 2017. The case was later dismissed by the National Prosecuting Authority (NPA).

The publication had gotten a hold of Limpopo police spokesperson Col Moatshe Ngoepe, who confirmed that the case against Sjava was declined for prosecution on November 5, 2020.

Sjava had suffered a heavy blow from the industry which conforms to the requests of social media and their ‘cancel culture.’ He lost out on gigs and was pulled from Uzalo after shooting had started. He has however managed to regain his image as he was cast in the drama-filled eHostela on Mzansi Magic.

He plays the character Fish who is a villain in the drama series and producer Mandla Ncgongwane said, “People have been craving Sjava, they haven’t seen him in a while. He’s been living under this whole entire thing that has been a kind of a cloud over his life. But now he can express himself.”