The pair have been spotted a few times together in the streets of Joburg, with Jeftha showing his appreciation for her rap performance in Soweto on Sunday.

The duo were sharing very cheeky Instagram stories between each other, which had us wondering, are they dating? 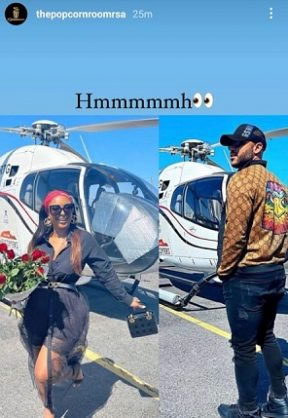 There are also pictures in question during Valentine’s Day when Boity posted a bunch of red roses and a private helicopter. Said partner was not revealed. However, Jeftha was also pictured in a very similar looking location with the same helicopter in the background.

Jeftha has made a name for himself playing Sebastian Price Junior (SJ) on M-net telenovela Legacy SA.

Because of his easy on the eyes appearance, this has landed him on the South African television hunk hall of fame according to fans, capturing the hearts of women across the land.

Boity was applauded at the weekend for speaking out against the comments Euphonik made when he shared a screen shot of a message purporting to be from his rape accuser. She said: “This is not a joke!!! You’re being accused of the most violent crime and you’re turning it into a shits and giggles circus!”

When asked for comment on the dating rumours, Jeftha representative Juliette Jansen said she had no comment.