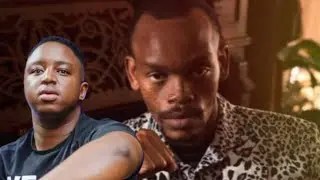 What a blow for big-mouthed Nota, he will now have to fork out some coins to pay DJ Shimza for what he said about him!

DJ Shimza will be smiling all the way to the bank where he will collect R200k in damages Nhlamulo “Nota” Baloyi has been ordered to pay him by the high court after the DJ won his defamation against the music executive.

In August, Nota took to Twitter to talk about his legal battle with the DJ, promising to use the courts to “teach” Shimza a lesson.

This after the DJ sued Nota for alleging in a series of tweets that Shimza was “corrupt” and “benefiting from political connections”.
In its judgment, delivered on August 12, the court slammed Nota for his “reckless” tweets and for regarding court proceedings as a “laugh”. It ordered him to pay damages to Shimza as well as the costs of the court case.

“An allegation of corruption should not be made lightly. Such an allegation is most serious in relation to the standing of a person.”

“I consider that the defendant (Nota) published the statements without regard to consequences. This was also illustrated by his evidence. He said whatever came into his head and contradicted himself within the same breath. His recklessness was ultimately shown by his evidence that having to answer in court was a waste of his time,” said acting judge Omphemetse Mooki.

The music exec, whose name has become synonymous with controversial utterances on social media, has landed in hot water previously thanks to his “logorrhoea”.

Earlier this year, Nota had to make an official public apology to Slikour for making “defamatory” remarks about him in a podcast.

“I Nota, unequivocally apologize to Slikour for the false allegations and offensive insults made during my interview on @everythingsamusic’s Instagram account entitled #Nota attacks #Slikour. I acknowledge that the false accusations I made were not based on facts and were extremely hurtful. I apologize unreservedly for any harm caused to Slikour as a result of insulting utterances,” read Nota’s apology.