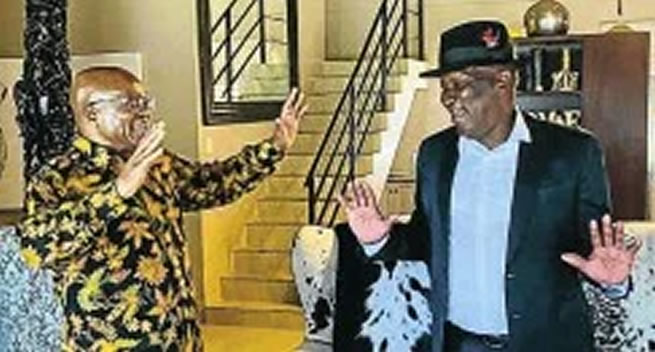 All indications are that embattled former president Jacob Zuma will not hand himself over to the police today to start his 15-month prison sentence imposed by the Constitutional Court earlier this week.

South Africa remained on a knife edge yesterday as fears that Zuma’s home province of Kwazulu-natal would be engulfed in violence, which might spill over to other provinces, including Gauteng.

Celebgossip has learnt that Zuma’s presidential security detail will be withdrawn tomorrow should he not surrender himself to the police today. The government was, however, still seeking legal advice on withdrawing his presidential guard.

We also understand that Police Minister Bheki Cele has been asked by the Presidency what the police were going to do about people who were breaking Covid-19 regulations outside Zuma’s home.

“The government is clear that JZ is not a problem but those who have gathered outside his homestead need to be dealt with. The government also says they need to be careful because amabutho want the police to fire first so that war can break out,” a source said yesterday.

It is understood that the provincial executive committee of the ANC in Kwazulu-natal has taken a position that Zuma must hand himself over.

Zuma was scheduled to make a public address to the nation in Durban this afternoon.

Zuma is understood to have told some ANC leaders that he was prepared to hand himself over to the police but was, however, not going to be able to control the actions of his supporters.

Zuma has been advised not to turn himself in pending the hearing of his urgent application at the Pietermaritzburg High Court to interdict Cele from effecting his arrest. It is expected to be heard on Tuesday. Zuma has also filed papers at the Constitutional Court to consider rescinding his jail term.

The matter will be heard tomorrow.

On Tuesday, acting Chief Justice Sisi Khampepe, in a scathing judgment, ordered that the former president hand himself over to police.

A senior ANC leader close to Zuma confirmed that Zuma would not submit himself to the police today. “He can’t hand himself over until the Pietermaritzburg High Court and the Constitutional Court hear his matter. He would not have broken the law by not handing himself over because there is a court matter,” the leader said.

“If there is no malice in the process, they [the police] will wait and see what happens on Tuesday. There should be no rush because they will still be within the time frames.”

Asked whether Zuma would hand himself over today, Manyi said: “That is what he will address tomorrow.”

Emeritus of the KwaZulu Natal University George Devenish said Zuma’s application to the Constitutional Court did not suspend the order for him to present himself to the police. Devenish said the Pietermaritzburg High Court, as a lower court, could not overturn the order of the highest court in the land.

“The fact that he has made an application does not give him the right not to present himself. This is not an appeal. He is making use of a rule that exists. I doubt the Concourt can do anything. As far I’m concerned, the matter is closed”.

This came as a security assessment showed that various groupings – including rogue elements in the taxi industry and amabutho – were being organised throughout Kwazulu-natal to unleash havoc in the province, which has a history of political violence.

At the time of going to press, hundreds of Zuma supporters were streaming into the former statesman’s homestead in Nkandla to block his imprisonment.

An ANC national executive committee (NEC) member said the situation in the province was tense and there were fears that violence could erupt.

The governing party had to postpone the meeting of its NEC over the weekend and dispatch senior leaders to Kwazulu-natal to avert chaos from ensuing.

“The information we have is that there is a lot of mobilisation happening in KZN. We are talking to different groups, taxis and other groups. There is a big implication of KZN turning violent and the violence there spreading to Gauteng,” the member said.

There were also concerns about the presence of amabutho outside Zuma’s house, where they joined members of the dissolved Umkhonto We Sizwe Military Veterans.

Amazulu Royal House denounced the presence of amabutho in Nkandla.

“Isilo samabandla [Amaprofessor Zulu king] is the only one who can summon and instruct amabutho. Amabutho are an important symbol, the heart, and the defenders of the Amazulu throne,” Amazulu royal house spokesperson Prince Thulani Zulu told Sunday World.

“The reigning king has not made any instruction to amabutho regarding what is happening in Nkandla. So those people are not representing amabutho … they are there as individuals and not sanctioned by the king.”

Zweli Dladla, the coordinator of taxi associations in Kwazulu-natal who are mobilising support for Zuma, said that hell would break loose should police come to fetch Zuma.

“This is not the time for negotiations, it is time for action. Every taxi association has donated taxis to transport people to Nkandla. We are ready for anything.” Nkosentsha Shezi, chairperson of the Radical Economic Transformation forces, said they would not settle for any political deal that does not exonerate Zuma from being arrested.

“We heard on the news that the NEC wanted to speak to us. Our position is clear, unless they want to tell us that the decision to arrest umsholozi has been rescinded, then we have nothing to speak to them about. “Ramaphosa and his friends should be happy because this is what they had wanted for years to see our father humiliated.”