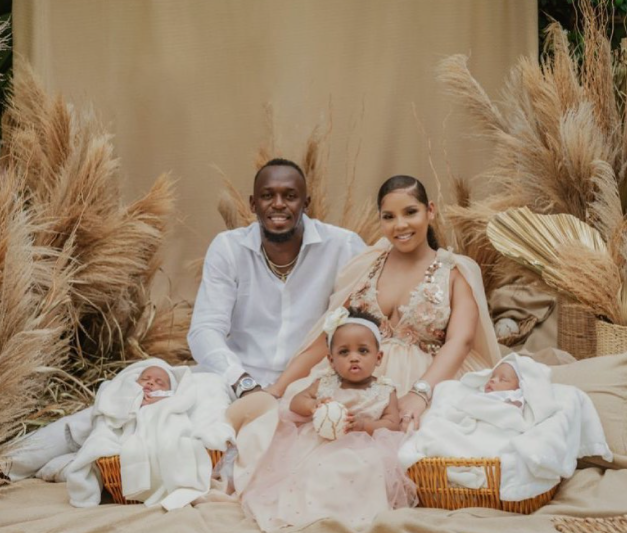 Sprinter Usain Bolt has had twin boys, named Thunder Bolt and Saint Leo Bolt. Bolt, 34, announced the news on Instagram on Father’s Day, with a lightning bolt emoji next to each of his children’s names.

The Olympic champion posted a photo of him and partner Kasi Bennett, with their twin boys and one-year-old daughter Olympia Lightning.

The couple did not say when exactly the twins were born.

Bennett also posted a photo with the babies, saying Bolt was “the rock of this family and the greatest daddy to our little ones”.

Olympia Lightning was born in May 2020, and her name was announced publicly two months later.

Before her birth, Bolt had kept followers updated of Bennett’s pregnancy on his social media. However, neither he nor Bennett had posted about her pregnancy with the twins.

Bolt, a Jamaican sprinting icon, retired from athletics in 2017 and still holds the 100m and 200m world records, making him the fastest man in history.

He is also the only man to have won three 100m Olympic titles and 23 major gold medals during his career.

After leaving athletics he tried to play professional football, but then announced he was leaving sports entirely in 2019.

Bolt is not the first celebrity to use a play on words when naming children.

In 2013 Kanye West and his wife Kim Kardashian West, who are currently separated, made headlines when they named their child North West.
Musician Jermaine Jackson named his son, who is now 20 years old, Jermajesty.