Artists call for the dismissal of Minister Nathi Mthethwa

Artists call for the dismissal of Minister Nathi Mthethwa 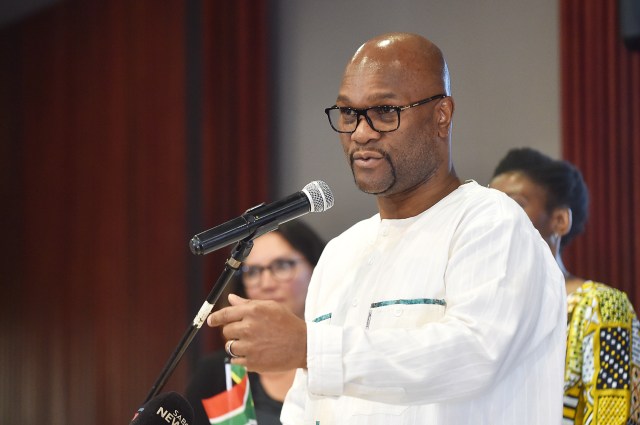 Artists are calling for the Arts and Culture Minister Nathi Mthethwa to resign, as they have not received a cent from the funds earmarked to be distributed to them during the pandemic.

Award-winning actress and TV presenter Thembisa ‘Liyema’ Nxumalo is the recent artist to call out minister on social media.

She wants minister Mthethwa to resign.
She tweeted: “Then he must resign and hand himself over to the police.”

The Unmarried star was responding to a Radio 2000 tweet which stated that the Minister is taking action against the officials implicated in the mismanagement of funds following the reports that R300 million that was meant to assist artists has disappeared.

The tweet read: “Arts and Culture Minister, Nathi Mthethwa says the National Arts Council is taking action against senior officials implicated in the mismanagement of funds. It’s been reported that R300 million earmarked to be disbursed to artists during the pandemic has disappeared #sabcnews.” 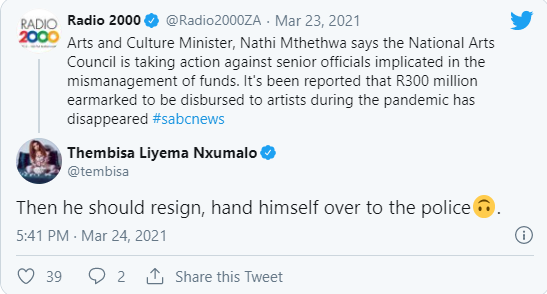 Last month Malika Ndlovu told eNCA that the minister lacks vision.
Malika is a Durban-born poet, playwright, performer, and project manager.
“ We are calling for a replacement of leadership because we feel that obviously leadership plays a fundamental role in seeing that a department fulfills its mandate and that there are effective management and implementation processes that happen,” she told the publication.

Other celebrities also weigh in on the matter.
Award-winning actress Rami Chuene tweeted: “I’ll be going about my business and boom! Min Nathi Mthethwa crosses my mind then ke be naar with immediate effect. What a yerrr!”

Rapper Nomuzi Mabena responded: “Every time someone says the name Nathi Mthethwa to me I jokingly say “who’s that?” & this tweet is exactly why.”

Artists have tried in many ways to get their voices heard, others have been camping at the NAC offices in Johannesburg, members of the Cultural and Creative Industries Federation of South Africa (CCIFSA) embarked on a hunger strike and sit-in at the offices of the Northern Cape MEC of Sports, Arts, and Culture in Kimberley.