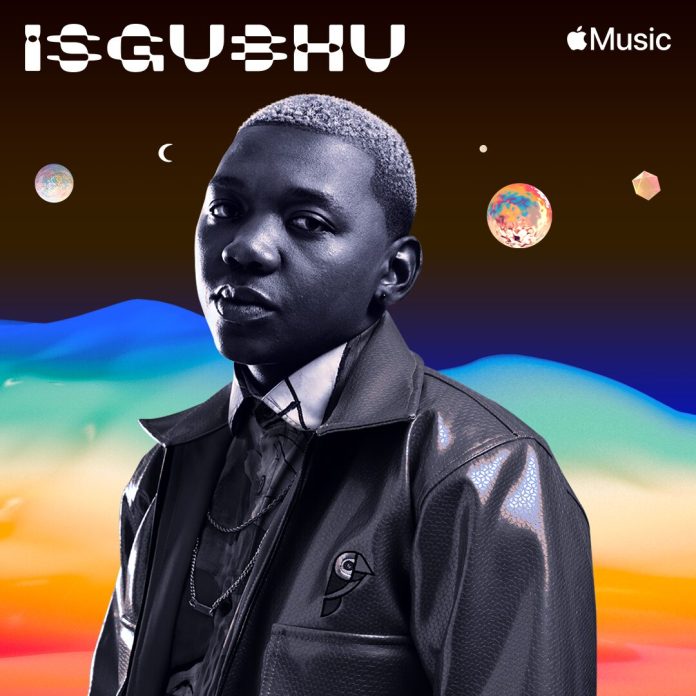 “Being on Apple Music’s Isgubhu cover is a huge honour. Dance music is a reflection of who we are as South Africans. I think of African dance music like a bamboo tree that has spread across nations and I’m proud to be a branch of that movement.”

Born and raised in Tembisa, the church gave him the foundation to explore his talent in music. Aymos worked his way through the industry from being a backing vocalist to a session pianist. It was his feature on “Emcimbini”, alongside Kabza de Small, DJ Maphorisa, Samthing Soweto, Mas Musiq and Myztrol, that cemented his place amongst the cream of SA’s Amapiano crop, as the track went on to become a chart-topping smash.

Aymos has created an exclusive Isgubhu playlist that features tracks that are exemplary of South Africa’s unique Amapiano genre. “I chose these songs because they signify a moment of reckoning about the transition of Amapiano. It’s evident that Amapiano changes all the time. The tempo keeps dropping, and the type of log drums used have evolved over time. As a result, it makes it hard for other countries to jump on it and make it sound like the real Amapiano unless it’s made by its very own people.”

Taking over Isgubhu By… for the month is South African producer Cornelius SA (real name Cornelius Mashilane) who is a self-taught DJ and producer from Soshanguve, Pretoria. He has risen through the ranks by making chart-topping music that is equal parts atmospheric, moody and rhythmic.

“Curating Isgubhu By… was one of the hardest things to do with so much beautifully produced music coming out of Africa. I carefully selected some of the finest cuts I really dig and some which I go to for inspiration, motivation or meditation. I included music from those that shaped who I am, to songs from music peers I speak to on a daily basis.”

Launched earlier this year, Isgubhu is the definitive home of African Dance and Electronic music on Apple Music and spotlights and elevates the work of African Electronic DJs, producers and creatives. Isgubhu, a Zulu word meaning beat and used to refer to a banging song, pays homage to an evergreen set of genres and the African artists who have played a pivotal role in shaping the Dance and Electronic scene across the world.

Isgubhu also houses a collection of playlists including Spotlight On – a focus on boutique labels like Soul Candi, House Afrika, Stay True Sounds and Uganda’s Hakuna Kulala & Nyege Nyege Tapes and Isgubhu Voices – a focus on the best Dance and Electronic tracks that feature vocals.

About Apple Music
Apple loves music. With iPod and iTunes, Apple revolutionized the music experience by putting a thousand songs in your pocket. Today, Apple Music takes this to the ultimate with over 70 million songs, thousands of playlists, and daily selections from the world’s best music experts, including all of the artists and hosts broadcasting daily across its Apple Music 1, Apple Music Hits, and Apple Music Country global live streams. Since 2015, Apple Music has welcomed tens of millions of subscribers in 167 countries. Streaming seamlessly to iPhone, iPad, Apple TV, Mac, Apple Watch, iPod touch, CarPlay, popular smart TVs, smart speakers, Android and Windows devices, and online at music.apple.com, Apple Music is the most complete music experience on the planet. Apple Music offers a free 3-month trial with no commitment and is ad-free.