Anele Mdoda nursing wounds after being ran over by a car

Anele Mdoda nursing wounds after being ran over by a car 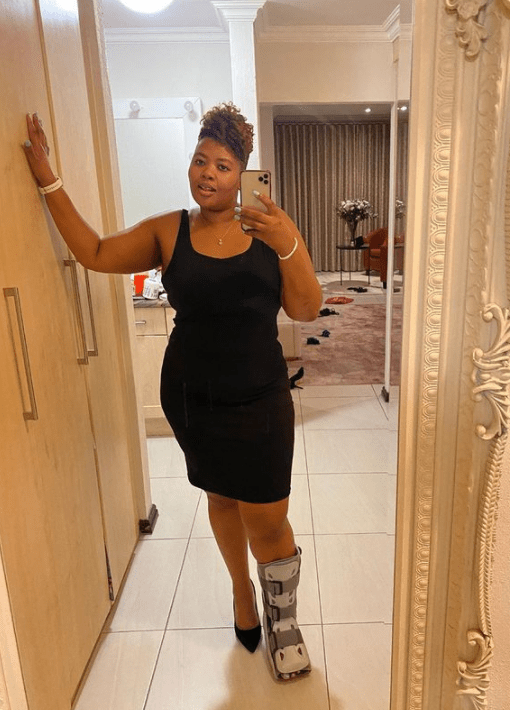 RADIO and TV host Anele Mdoda was involved in a car accident on Saturday, 25 September.

That day, the media personality posted a photo of herself wearing a moon boot on social media and said she would share the story of what happened during her breakfast show, Anele and The Club.

As promised, she shared the story on Monday, 27 September, when she said she’d been hit by a car.

Anele said she had just flown back from home in the Eastern Cape and was at OR Tambo International Airport when the accident happened.

She said she was waiting for her boyfriend to pick her up from the airport, so she went to wait for him at the pick-up point on the ground floor.

“Then I’m on the floor and I’m wondering what is going on. The next thing I feel my right foot is just stuck. I’m trying to move it, but it’s stuck. Now I can’t move my entire body, but there’s something on top of me. Guys, did I not get hit by a car!” she exclaimed.

Anele said after she was hit, the driver didn’t move the car on top of her. Instead, he got out and started blaming her for the accident and said it happened because she was on her phone.

The Celebrity Game Night host said the shoe she was wearing saved her ankle.

“It was a Cassper Nyovest 990, I actually called him yesterday and told him to listen to the show today. It’s got quite a sole and that’s why the car couldn’t climb onto it. The shoe is that strong,” she said.

She said her ankle was fortunately not broken.

“It’s not broken, in fact, I think the moon boot is a bit of an overkill, but the doctor didn’t want me to go home, the one that I saw. The biggest bruise is the skin scrape which is just 4cm above from my ankle

“There’s a huge wound, I kept on saying to the doctors it’s burning, I feel a burning sensation. But it turned out I had scraped that entire side when he dragged me on the tar,” Anele said.