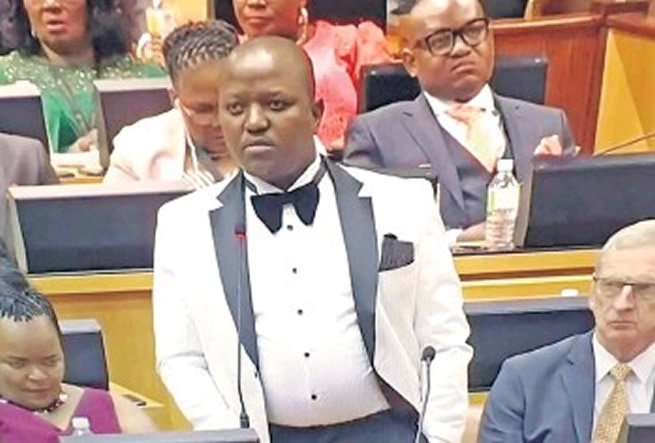 – She was admitted to hospital for several days

– He claims she’s a bitter ex who cheated on him

ANC MP Boy Mamabolo, who accused EFF leader Julius Malema of abusing his wife, Mantoa, during the state of the nation address (Sona) debate, allegedly used an empty Coca-cola bottle to bludgeon his baby mama’s legs and tried to gouge out her eyes.

Details of the alleged attack form part of what the baby mama, Magdeline Makgato, claims was a series of domestic abuse incidents dating back to 2012, which had resulted in her being admitted at a Medi-clinic Polokwane. Following that alleged attack, she had obtained a protection order, which she says he violated. Mamabolo, in turn, had also obtained a protection order against her and her father.

Makgato said she was surprised that Mamabolo was now a “champion of the rights of women” though he had never apologised to her for the beatings she endured from him.

Mamabolo caused a storm in parliament this week when he claimed Malema was abusing his wife Mantoa – a claim he has since withdrawn following admonition from President Cyril Ramaphosa, who told MPS that domestic abuse should never be used to score cheap political points.

This week, the baby mama recalled how in June 2012 Mamabolo had rocked up at her school in Tshwane, had taken her against her will and kept her at a house in Seshego where he had reduced her to a punching bag. The baby mama said she was rescued by Mamabolo’s mother, who had asked him to stop beating her.

Speaking to Sunday World from China, where she has relocated for work purposes, Makgato confirmed that she had subsequently opened a case of assault against Mamabolo.

“I think he found something in my cellphone because he is snoopy and loved fidgeting with my cellphone. He then found some message from one of my classmates and because he has some inferiority complex issues, he then accused me of cheating on him and started beating me up. I almost lost my life because after beating me up with his hands, he took an empty bottle of Coca-cola and started hitting me with it on my knuckles and legs. He then tried to gouge my eye out but failed to do so,” she said.

She said she had dropped charges against Mamabolo because of the inconvenience of pursuing a case in Polokwane while based in Pretoria.

The blood-curdling tidbits of the incident are contained in police statements she deposed at Seshego police station when she opened one of the cases of assault with intent to do grievous bodily harm (GBH) against the politician on June 16 2012.

In a statement, which is in our possession, the police said Mamabolo had taken the baby mama against her will on June 13 2012, keeping her at his home in Seshego township, outside Polokwane.

“She was locked [in] and beaten badly. The complainant [name withheld] was at her boyfriend’s homestead and her boyfriend assaulted and hit her with a bottle of coke [sic]. She further alleged that she sustained tissue injuries. Then on 2012-06-16 at about 22:30 he released her with injuries and dumped her at her gate [at her home] and left. Her mother came and assisted her and summoned an ambulance. After being discharged from hospital, she applied for a protection order against him. On the 2012-06-25 at about 16:35 she received a message from her ex-boyfriend stating that ‘u will only get your clothes after [name withheld] has won the case’. Suspect is Boy Mamabolo,” reads the statement.

But according to police records, Mamabolo too opened a case against his baby mama and her father a month after he had allegedly assaulted her. He claimed at the time that they had violated the protection orders he had obtained against them. In his statement, he had alleged his baby mama and her father had sent him threatening messages and he therefore feared for his life.

Asked for comment, ANC chief whip Pemmy Majodima said she would first engage with Mamabolo before commenting on the matter. But she later said Mamabolo was not an MP at the time of the alleged offences.

ANC spokesman Pule Mabe said the ANC had issued a statement condemning the use of gender-based violence to score political points and refused to comment further.

Mamabolo said the baby mama was a bitter ex who was out to destroy him.

“I dumped her in 2012 after discovering that she was dating [EFF leader] Jossie Buthane. She then fabricated those charges against me but voluntarily withdrew them later because she knew that she would not sustain them in court. The fact is I was never found guilty of assault by any court of law,” he said.

As a country, we have such a beleaguered relationship with sexual violence and abuse. This week, jailed rap artist Pitch Black Afro appeared in court to listen to spine-chilling details of how his erstwhile lover and wife Catherine Modisane was killed.

The artist, whose real name is Thulani Ngcobo, is accused of using a blunt object forcefully on Modisane’s head, killing her on Near Year’s Eve in 2018. On Page 9 of this newspaper, we report about teachers in Limpopo not only having inappropriate sexual relations with vulnerable pupils, but also how some of these children have been impregnated and teachers are paying maintenance for these. These teachers betrayed the children. Again, elsewhere in the paper, we report about how ANC MP Boy Mamabolo has a history of violence, a scourge he pretended to abhor. Elsewhere in this edition, the Vaal University of Technology, with many management challenges, also harbours “leaders”, and we use the word very loosely, who demanded sex from their female colleagues either for promotion or appointment to jobs.

Statistically, it is estimated that about 40% of South African women will be raped in their lifetime. Of the reported rapes, only 14% are convicted while one in nine incidents are reported to police. And we are not yet talking about other forms of violence. The examples are many and the details varied.

Under the circumstances, we would say it is abhorrent of politicians to use the issue of gender-based violence as a political football. The logical assumption would be that we expected more from them. The truth is we have come to a sad place as a country, where we can’t put such a sick joke past politicians; where we don’t expect them to exhibit the highest of excellence.