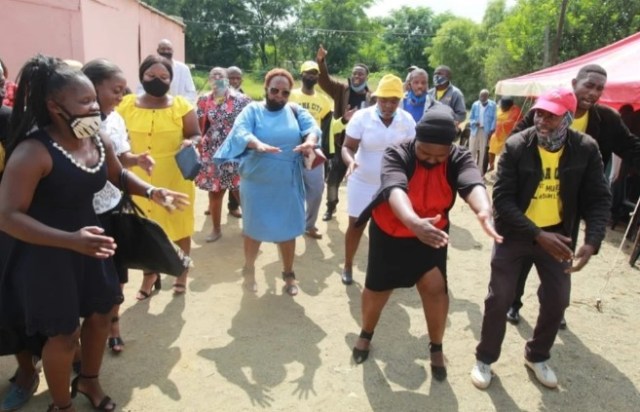 People danced and celebrated during the funeral of the late amapiano singer Wakhe.

Family and friends danced as if it was a wedding day while it was a burial of one of their own Sello “Wakhe” Motsepe (48) died last week Sunday in Mmakau, North West.

He died after a short illness.

People said that Wakhe would have wanted a happy send-off as he was a man full of jokes and his community loved him and wanted to always associate with him.

Wakhe was buried at Tshwara Cemetery in Mmakau on Saturday.

People danced to his EP called Mpho Nthite which was launched last year November in Rama City in Tshwane.

They danced to his songs at home and at the Cemetery.

They described him as a hard worker and a man who loved his children.

Her aunt Maria Motsepe (61) told Daily Sun that they celebrated his life, and it was special to him.

“Death is not a good thing we are hurt but whenever we think about him, we will play his songs,” she said.

Maria also said that Wakhe has left a space that no one will be able to fill.

Wakhe’s brother, Thomas Motsepe (47), said it will take time for him to recover.

“Listening to his songs, I feel like he will come and say Ntwana. A big tree has indeed fallen in this family,” he said.

“He left a huge space, we lost an extra hand and was a community worker,” he said.

He said Wakhe was a straight talker and a community builder who would listen to community concerns and take them forward.

Friends and family also dance to the songs even at the gravesite.