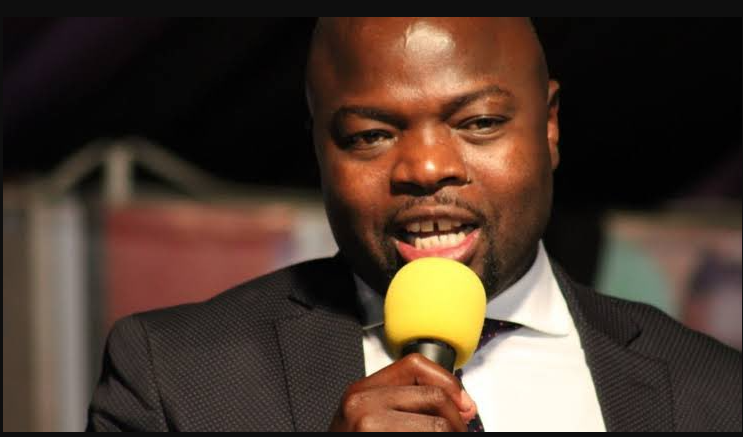 The issue around pastors who are predators has been a big one in South Africa and we have seen the likes of Pastor Timothy Omotoso and Bishop Stephen Zondo face charges levelled against them.

Bishop Israel Makamu is the latest pastor to take the spotlight in this negative manner after allegations and cases about soliciting sexual favours from a young girl surfaced.

The Bishop’s sex scandal has boiled over so much that his wife was alleged to have offered the victim’s family hush money to the amount of R1-million. Disputing all these allegations on the Moja Love show AmaBishop – a show aimed at exposing corrupt and unrighteous church leaders – Makamu claimed to have only been calling the young girl for the church keys, as she was an employee at the church. He further disputed that his wife had offered the girl’s family money to make the case go away.

In light of these allegations, well-known figures such as Uthando Nesthembu’s Musa Mseleku have come out in support of Bishop Makamu. The polygamist vehemently expressing that he does not understand why any of this is a big deal.

Mseleku is not the only one who has taken Makamu’s side. During Sunday’s episode of AmaBishop, many viewers were also interested to hear what other Pastors on the panel, including Pastor Joshua Maponga and Pastor Phiri, had to say about the matter. To their disappointment, many noticed that both pastors were rather taking Makamu’s side. Instead of Maponga grilling Makamu, he advised victims against taking matters to social media, or the mainstream media. On the issue of congregants calling pastors ‘Daddy’, he instead said that it is a mechanism to fill the void left by absent fathers, therefore seeing nothing wrong with it. Pastor Phiri also sang a similar tune.

Maphonga and Phiri had an issue with Bushiri's congregants calling him "Papa". Today it is okay for Makamu to be called "Daddy". The hypocrisy. SIES #Amabishop

Amabishop proves how these pastors will protect each other because it's what they are doing to women. They stand with each other cause they know they do the same. Maponga and Phiri are no different to Makamu. The only difference is he got caught. Smh! #Amabishop

Maponga and Phiri truly exposed themselves in this episode, they should hide their heads in shame #Amabishop

However, it seems as if Pastor Phiri is changing his tune. After the show aired, the pastor issued a statement in which he apologised for his utterances. He further expressed that he distances himself from statements that undermine women, and expressed that his duty is to protect women and children in the church.

The statement was released through Solomon Izang Ashoms’ Facebook account – the man responsible for exposing Makamu and helping his victim seek justice.

“I wish to apologise unconditionally for the way the message was conveyed by myself as if i was in support and condoning the alleged actions of Bishop Makamu. I hereby, distance my self from any utterances which undermines women and to be more specific those victims who have suffered under the Clergy.

“It is my responsibility to protect women and children in the church against the charlatans and those who seek to exploit them financially, sexually and otherwise. I wish to apologise to our viewers those who take time to support and watch amabishop on channel 157 and those who follow me on various platforms both TV and social media.” 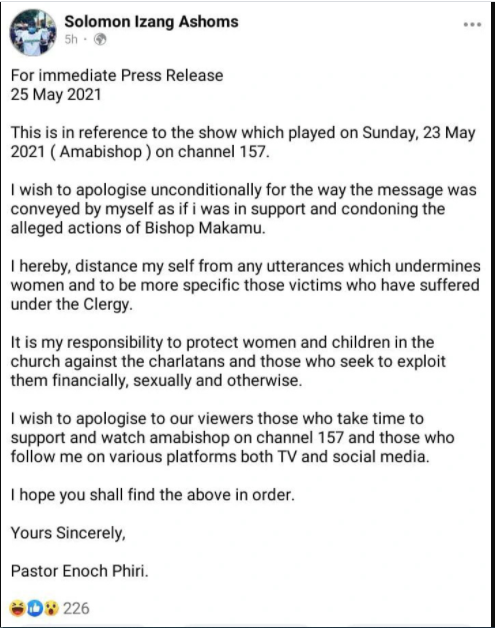