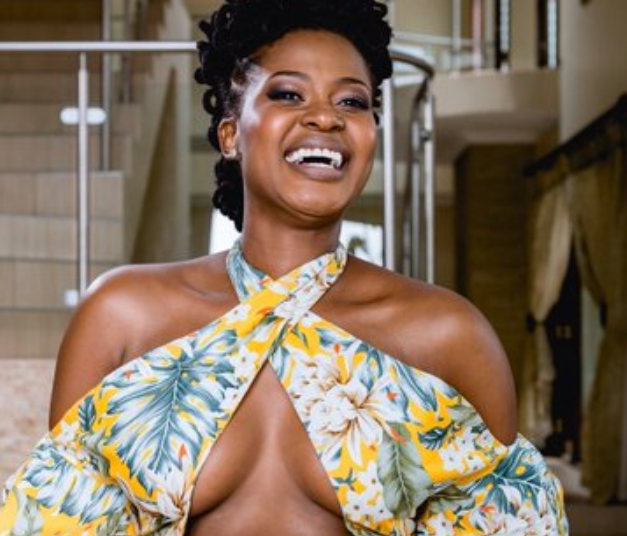 Actress Zenande Mfenyana has exposed herself once again for being a crude person. This comes after she tweeted about her encounter with a cashier who recognised her from a particular TV show but could not remember her name.

Cashier: You look like this other actor so
Me: Oh ok, which one?
Cashier: Omong so
Me: Errrr 🤔
Cashier: Ke wena neh?
Me Nna mang?
Cashier:Ke wena maan! Kutlwa ka voice
Me: ok sure

Zenande has gained fame from her role as Noluntu Memela on Generations, before it got revamped to Generations The Legacy. Currently she plays Goodness Mabuza on The Queen and just mothered a girl child.

Tweeps are fuming and questioning why could she not just tell the cashier these particular roles to avoid drama. Concluding that Zenande is indeed a crude person.

Many of her fans have exposed her before for being a very rude person when they ask for pictures or when they get excited to see her.

Tweeps reminded her that humility and being a friendly person could get her to Thuso Mbedu’s level.

“Funny how you think being a mean spirited person is okay hey. Sithule nje siyabuka (we are watching silently). OThuso, Bonang, Nomzamo ,Trevor Noah and So many other entertainers that are even newbies like Amkele Qamata are doing WAY better than u but here you are. Go on sis,” a tweep commented.

Another tweep defended her by saying there is nothing wrong with that conversation, “You guys always bully Zenande, there’s nothing mean about this conversation. Niyadika maan, so she must never tweet coz you guys will judge.”

Zenande Mfenyana is so rude for absolutely no reason 😏

Zenande Mfenyane once poisoned her own mom, she's so evil bathong.

You cannot convince me that Zenande isn't a toxic being, I honestly feel sorry for the people who have to be around her pic.twitter.com/KSfDGauXxW

Remember the time Zenande bashed her helper and brought it to Twitter exposing herself as a mean girl. “Helpers are exhausting,” her tweet read as she exposed how much she dislikes her helper.

Another incident was when she posted her pregnancy pictures where she was visibly swollen and gained a bit of weight. A normal pregnancy side effect. What she did not expect though was the unsolicited advice she got from a female follower who went through what she went through.