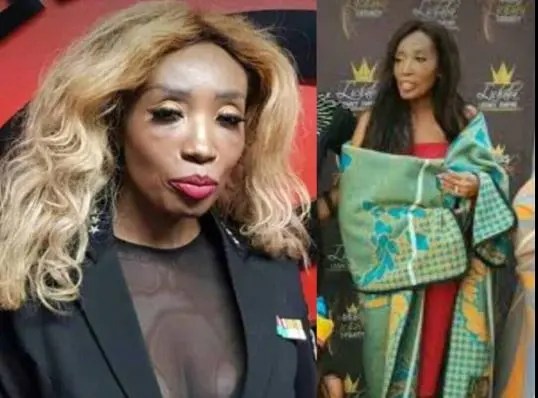 Mzansi’s top actress Sophie Ndaba, and popularly known as Queen Moroka on the SABC 1 soapie – Generations – is now officially back on social media after taking a break for nine months.

The 49-year-old businesswoman’s “disappearance” had fans worried about her, knowing that her health was said to be in a fragile state. But the star returned to social media with a bang. She posted on her Instagram feed that she has returned, posting that she’s grateful for her past and future as she thanks God for the new season.

She wrote: “Dear Past, thank you for the lessons. Dear Future, I’m ready!! Dear God, Thank you for the new season!! #GodsFavouriteDaugher #itsGoodtobeback #ItsAnewSeason #WomenPower”

The news crew tried to get a hold of Sophie, but she wasn’t available to comment.

Sophie is also a motivational speaker, MC, and event organizer/ planner who was born in Soweto. She’s best known for playing Queen Moroka on Mzansi’s popular soapie Generations. In 2016, she was a guest judge in the final Miss South Africa 2016 beauty pageant.

During her acting career, the star also bagged awards for the amazing acting skills she has consistently portrayed. In 2003 she won the Duku Duku Award for Best Soap Actress, and was nominated for the People Magazine Crystal Awards, and she won the Kellogs Star in You Kids Award for Favourite soap Actress in 2006 and in 2009, she won the Golden Horn Award for Best Comic Actor.

The woman who exploded onto the small screen as Queen Moroka in the soapie Generations almost 20 years ago is refusing to bow down. Emerging from a bruising period in the past few years when she had to fight off untrue rumours about the reasons behind her drastic weight loss, Sophie Ndaba is not only back with a bang, but is confidently brushing off detractors who spread rumours that she is HIV-positive, even that she died.

Sophie Ndaba came out publicly about her fight against diabetes, and the devastation it wreaked on her health and wellbeing. She also hit back at those who had ridiculed her dramatic weight loss, saying that many South Africans don’t know what it is like to lose half themselves and think it is a joke.

In 2019 when fake news broke the internet claiming that Sophie Ndaba had died, the actress later explained how the death hoax, which went viral on social media, traumatised her teenage son, who got wind of it while at school and couldn’t get in touch with her.

“I was at a meeting so my phone was on silent when the rumours started trending. My son tried to call me but couldn’t get hold of me. Do people who start these rumours even think about what it does to our children, or that parents can end up having a heart attack?”

Sophie is diabetic and both her late parents were diabetic too. For her family, diabetes is serious and sensitive.

“Yes, I have lost weight and so what? I’m diabetic and taking good care of myself. My diet and habits have changed,” Sophie says.

Sophie Ndaba, who, after divorcing Themba Ndaba whom she married in 1998, later got married to Max Moeketsi Lichaba in a traditional ceremony in 2018, later separated in 2018 before eventually divorcing in a nasty public mudslide.

Her son, Lwandle Ndaba, who is a rapper, composed a song meant to expose Max’s shenanigans and the song had the following lyrics: “You left your wife bruised up on the body. I won’t forget the day you hit her cause you cheated. You cheated with my best friend. She is young enough to be your daughter, R Kelly wanna-be,” according to the lyrics of the song”

As if that was not enough, Sophie Ndaba would later be called a “witch”, “thief” and other ugly names by her sister-in-law as the two families reacted to Sophie’s son’s song.

In Whatsapp messages sent to Lwandle, Lichaba’s sister Aiso Lichaba instructed the music student to “remove” the ditty and threatened to spill the beans on the former Generations actress’ “stealing ways” if he did not comply to her demands.

“Look here b@tch… that is my brother you are singing rubbish about. Did you ask that stupid mother of yours what she did to Moeketsi? You Satan, who do you think you and your witch mother are?” reads a Whatsapp message.

Aiso also said Lwandle and the former Isidingo actress were struggling to make ends meet when the Kwa-lichaba chisanyama owner came to their rescue.

Lwandle stood his ground and told her that the tune was exposing to the public the true reflection of what happened in Lichaba and his mother’s turbulent marriage.

These are some of the troubles Sophie Ndaba has faced in the past 4 years and she says she has overcome all that. The prominent wedding planner is now ready to face the world head-on and give her best shot to her fans on social media as well as her business stake holders.