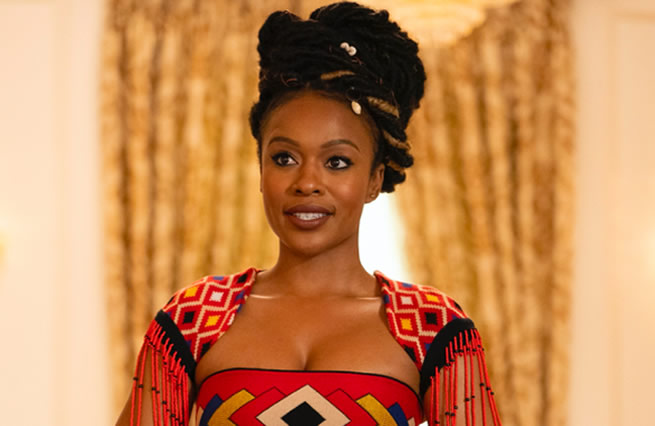 When Coming to America first came out, actress Nomzamo Mbatha wasn’t even born yet. Now 33 years later, she’s scored a major role in the film.

When the first “Coming to America” movie came out, actress Nomzamo Mbatha wasn’t even born yet.

And now, 33 years down the line, she anxiously awaits the film’s release in the hopes that fans enjoy watching the film as much as she enjoyed working on it.

In an interview with The Citizen Mbatha opens up on her earliest memory of the movie .

“I just remember that I was not supposed to be watching it. I must have been like nine and my dad loved it so much so he had a VHS tape and he used to play it all the time.

“I just remember seeing all the royal clothing and thinking wow, this is beautiful, this is amazing. It wasn’t until I was a teenager watching the rerun that it became one of my all-time favourite films and thinking ‘oh, so that’s what they meant? Oh! That is not a joke for kids,’” shares Mbatha.

After moving to the United States to pursue a new chapter in her career, the actress quietly auditioned for a role in Eddie Murphy’s revival of his iconic film.

“I actually found out on my grandmother’s birthday,” says Mbatha, recalling how she found out that the role was hers.

She recalls how she had just returned home from watching a Soweto Derby soccer match at FNB Stadium and received a call from her manager who had her American agency on the other line.

After assuming the purpose of the call was to let her down easy, Mbatha admits to bawling her eyes out with happiness after hearing she had gotten the role.

“It’s a really beautiful feeling to feel like you’re one step closer to realising your dream.”

Last week, she was finally able to let the cat out of the bag about what role she will be playing in an Instagram post where she introduced Mirembe.

“A lot of people are thinking I’m a bather and I’m like ‘no, she’s not, wait until the 5th of March to find out the details.’”

Mirembe is a barber in Zamunda which Mbatha says is unconventional for the fictional nation that is still heavily patriarchal, even in 2021.

“She goes against the grain. She’s smart, she’s charming, she’s witty, she’s quick with her tongue but she’s also very traditional in her ways. She understands Zamunda. She’s very passionate about the Zamundan people, culture and history.

“When the long lost son arrives in Zamunda, he kind of finds solace in her chair.”

In her character poster, Mirembe proudly wears a costume that may look familiar to many South Africans.

It is then that Mbatha gushes over working with award-winning costume director, Ruth E Carter who sourced a lot of Maxhosa for the Coming 2 America characters to wear.

“And I’d tell everyone in like, the palace as well, during scene takes and stuff, I’d be like ‘you guys know you’re wearing African luxury right?’ It was so serendipitous to say ‘here I am, wearing full Maxhosa regalia.’”

She explained that Carter, who did the costuming for Marvel’s Black Panther, was open to suggestions and that is how Mirembe’s costume got a little tweak in the form of the sleeves she’s wearing which were actually beanies before Mbatha suggested she try wearing them on her shoulders.

“Her research is insane and her process is out of this world.”

Women played important roles in every part of bringing this film together but Mbatha says this spirit is most evident on screen.

“Lots of female power in this movie. So much womandla, so much strength that exudes through the screen. Each female that is in this movie is going through her own journey of just like, owning her voice and owning her power and actually dismantling systems that existed before.”

According to Mbatha, the purpose is another central theme in the movie as many of its characters set out to find theirs in one way or another.

“A lot of people don’t give comedy movies enough credit in terms of how much they teach us. There’s always a lesson in comedy.”

Mbatha then shares how she feels as though some moments in the film would have led to loud cheering in the cinema if people were able to enjoy the film as they normally would have pre-Covid.

“You have to watch it with people that you love because it’s so beautiful.”

She concludes by joking that she’s very nervous for everyone to see it because she got a lot of fan messages about how she better not mess this up.

Where to watch Coming 2 America in South Africa