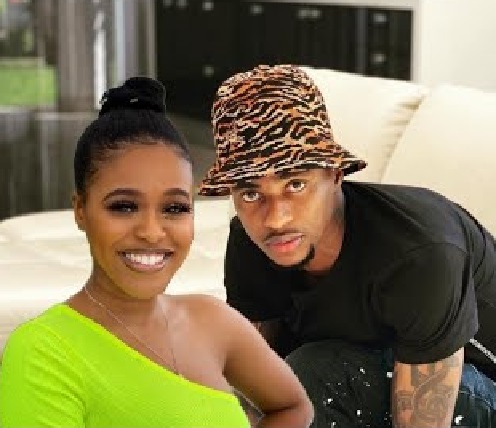 There seems to be trouble in paradise between the actress NatashaThahane and her soccer bae Thembinkosi Lorch. Fans couldn’t help but notice that both of them unfollowed each other on Instagram (IG). But that’s not it, it seems as though they also removed each other’s pictures on the Gram too.

Natasha Thahane is a South African actress who is well-known for her acting roles in the SABC 1 daily TV Show Skeem Saam, Mzansi Magic The Queen and Lockdown. The beauty has also played some roles on eKasi, Galz and Saints. She is also a graduate of New York Film Academy (NYFA). Her bae, Thembi Lorch, is a soccer plays who shoots for Soweto giants Orlando Pirates.

Is this another one of their stunts just to get social media talking or is it a legit break up? We wouldn’t be surprised if this is another publicity stunt because the “couple” dribbled us when their relationship first went public.

I’m not a stalker but seems like Natasha and Lorch removed each other’s pictures on Instagram 🥲 pic.twitter.com/Eoc2P8Eo03

They flatly denied dating each other, not only that but Lorch pretended like he did not even know who Natasha Thahane is.

They first sparked dating rumours when they shared snaps of them individually but they were in the same location. They were both on a vacation in Zanzibar and that is when the dots started to connect.

Natasha posted an image of her wearing an orange bikini and shades. That’s when Twitter investigators zoomed in on her shades and saw Lorch’s reflection on them.

Lorch’s friend DJ Maphorisa went on Instagram Live and publicly asked Lorch about he and Natasha. That is when Lorch pretended to not even know who the Blood And Water star is. “Natasha, Ke mang?” he asked. “What do I have to do with Natasha?” he continued.

But they confirmed their relationship status when Lorch posted a picture of Natasha, and captioned it “beke le beke” which means “week in, week out.”

Just a few days ago, Lorch was celebrating his birthday and Natasha shared a sweet post about her bae. “Happy Birthday King @thembinkosi_lorch_3. May God continue to protect & guide you all the days of your life. Wishing you many more years of happiness, love, peace & full access to heaven’s resources. I admire and respect who you are. I love you Mr! Beke le beke.”

After her relationship with Lorch went public, Natasha revealed that men flocked her DMs, trying to shoot their shot. “Amadoda angaka in my mentions axakwe indaba zam (so many men in mentions all up in my business. I miss the days when men used to go to war,” she said. She also added that she was raised with respect but that does not mean she should tolerate it, “Sikhuliswe nge’hlonipho kodwa akusho ukuthi asikwazi ukuba hlaza,” which translates to ‘we were raised with respect but that does not mean we cannot be disrespectful.

She posted a cute video compilation of them on vacation and also pictures of them looking very cosy. Of course if you missed all of this, tough luck because the pictures all disappeared into thin air. They both deleted them.

Social media is convinced that the couple is over. Here are some of the reactions:

You probably asking how can Lorch leave a chick like Natasha..

No matter how Sexy & pretty you are… But a man after fucked you he'll never look at you the same way!

If two minutes noodles was a relationship 🤣😅 ||Lorch || Natasha pic.twitter.com/4hRLGLiXG8

You're out here talking about Natasha and Lorch that time your relationship is in ICU asking for Amageu. pic.twitter.com/w4ujuWR5Va

Lorch and Natasha broke up, we always said that it will end in tears, Celebrities love life is not easy, it’s just a matter of Smash and pass 😂 pic.twitter.com/MrNLrQ5PuW