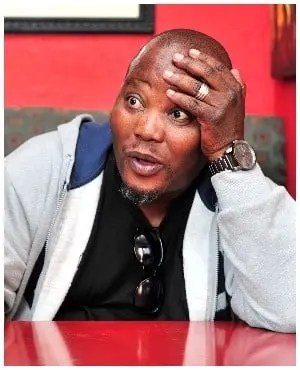 COMEDIAN and actor Kenneth Nkosi has opened up about his divorce.

In his post, Kenneth disclosed that divorce was not a quick and easy decision.

He said he considered a lot of things beforehand, including his children and both families, and had tried everything possible to fix his marriage.

He was responding to celebrity couple Monwabisi “Mo” and Phindile “Phindi” Grootboom, who were arguing that divorce was the quickest and easiest way out.

The video starts with Mo saying: “Divorce is the quickest way out. It’s the easiest decision to make. The toughest decision to make is to actually stay because you decide to stay against the backdrop of everything the person has done.”

They also captioned the clip: “Divorce is the quickest way out.”

But their fans and friends, including Kenneth, disagreed.

Kenneth posted: “My friend, I don’t think so though. Divorce is the toughest thing one had to go through. Remember by the time it comes to divorce, one had tried everything humanly possible to fix things. There’s a lot to consider before you get to that decision. There are families and children to think about. That can’t be an easy way out. I had to leave, not only for my sanity, but for the kids too. When it’s toxic, walk away before you spend thousands of rands trying to fix your kids at a later stage in life. Mental health issues begin right there. Baleka Bawo.”

Other Instagram users also shared their experiences, including Sphokazi Mngxali, saying: “Most difficult decision ever, but I had to make it because my life was more important. Today the individual is not around and that, for me, was confirmation that I made the right decision. Ten years later, I am still grieving because I loved and actually still love that person. After prayer and counselling, both of us had to make the decision. There are so many factors that go into making that final decision.”

Then Tsepi added: “Can we please start speaking from experience, and not just a point of opinion? There’s nothing easy or quick about divorce. It had destroyed many who got it as a last resort to a situation that was just not working out.”

Thandi wrote: “It’s something that lingers on your mind if you absolutely did your best. However, I want to differ with the notion that it’s the quickest and easiest way out. The trauma you have to deal with in your mind before people start judging you and being an outcast, especially in the house of the Lord, is painful. So no, it is not the easiest of escapes.”