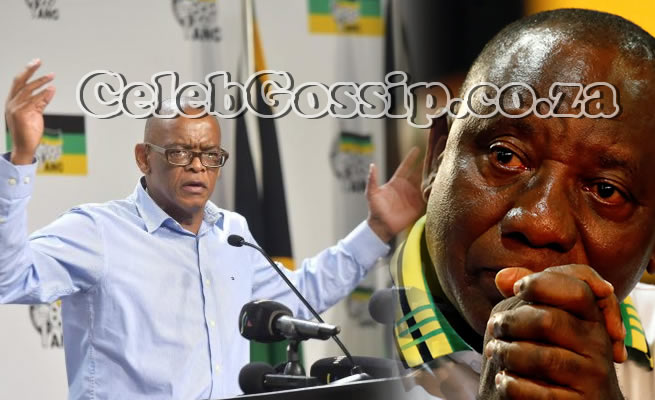 ANC president Cyril Ramaphosa yesterday displayed his resoluteness for all to see who is boss by giving Magashule his marching orders and telling him to apologise. Backed by a strong endorsement from the party’s top brass national executive committee (NEC), Ramaphosa told Magashule to stay at home and apologise publicly for undermining him with an unwarranted suspension.

But an adamant Magashule vowed he would not apologise to anyone and he would proceed with legal action to challenge his suspension by the ANC.

A reliable source close to Magashule, who said he met him soon after Ramaphosa made the announcement, said the secretary-general would pursue legal action and nothing would stop him from speaking publicly, or doing what he wanted to do.

“The secretary-general has appealed the suspension, he will proceed with legal action. But he will not apologise because he is convinced of the position he has taken,” the source said. Ramaphosa, in post-NEC closing remarks, said the letter Magashule wrote to suspend him was seen by the NEC as “not authorised”, “not mandated” by any structure of the movement and in flagrant violation of ANC rules, norms and the constitution. The NEC stopped short of hauling him before a disciplinary committee for putting the party into disrepute.

Instead, he was ordered to make a public apology to party structures and members.

Whether he will do this remains to be seen.

The sidelined secretary-general is left with two choices: to accept the party’s censure and humble himself to Ramaphosa, or defy and face disciplinary action that could see him being expelled.

Ramaphosa indicated that Duarte was abused by Magashule’s supporters at Luthuli House. He condemned the “unwarranted attacks” and “insults” by staff at Luthuli House for carrying out a duty she was asked to do by the NEC, national working committee and senior ANC officials.

The NEC’s decision ended speculation the ANC could ditch its step-aside rule in a bow to pressure from Magashule’s supporters in the NEC and outside the party.

However, the governing party will still go on a lekgotla to discuss strategies to strengthen its renewal and unity project as suggested by former party president Thabo Mbeki. But all this will happen without Magashule.

Magashule’s supporters pushed for the lekgotla in the hope it would accompany the shelving of the step-aside rule and withdrawal of the suspensions of Magashule, ANC MP Bongani Bongo and others. The NEC did not entertain Magashule’s ally, Dakota Legoete, and some branches in eThekwini and North West, which called for a special elective conference.