8 undocumented foreigners arrested together with their employers in Pretoria, Spar shops in hot soup

8 undocumented foreigners arrested together with their employers in Pretoria, Spar shops in hot soup 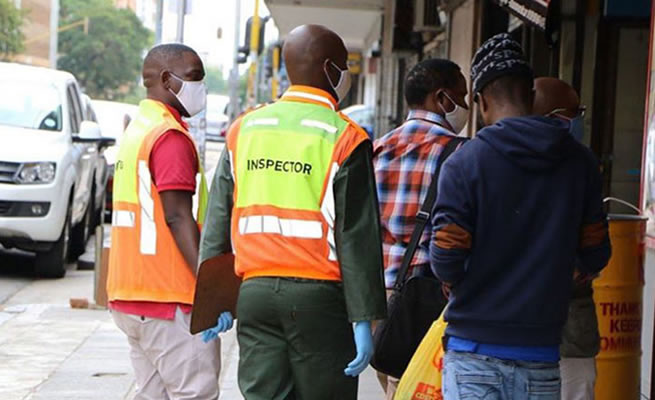 Eight undocumented foreigners and two employers were arrested at a shop in the Pretoria CBD on the first day of the “mega blitz” inspection on Monday, the department of employment and labour said.

Prohibition notices were issued against the use of eight other employees at the shop for contravention of the Occupational Health and Safety Act.

The department’s inspection and enforcement services in Gauteng, police and home affairs officials are conducting inspections this week in the wholesale and retail and hospitality sectors to check the level of compliance with labour legislation.

Mishack Magakwe, the department’s Gauteng spokesperson, said the undocumented foreign nationals and the two employers were arrested in the Pretoria CBD on Monday.

The mega blitz inspection was led by the department’s Inspector-General Aggy Moiloa.

The department said the undocumented employees and their employers were arrested at the MHC World (Metro Home City) store in the Pretoria CBD, at the corner of Du Toit and Johannes Ramokhoase streets.

The prohibited employees were found to be unqualified to work and were without proper personal protective equipment (PPE), such as suitable shoes and uniforms.

“According to the regulations and the Act, no-one is supposed to work in hazardous areas unless they are provided with the proper PPE,” said labour inspector-general Aggy Moiloa.

“Hence, such employees will not be rendering their work until their employers provide them with proper PPE. However, the Act states that the prohibited employees are still entitled to their salaries even when they are off-duty as prohibited by the department until their employers comply. There were also two employees who had bought their own work uniform which the law is against and for those two, the employer has to pay them back their money.”

“The Spar stores around Pretoria are currently under investigation as well.”

“In this particular workplace, I think it’s about eight people that we arrested. They were found not to have the right documents because they are foreign nationals. The right documents in terms of the work visas and work requirements in that space. So, it was the inspectors from Home Affairs who arrested them,” said Moiloa.

“In terms of immigration law, when you find such [discrepancies or non-compliance], the employer also gets arrested because they would have violated the Immigration Act. The employer was taken alongside the people that were found not in possession of the right documents,” Moiloa said.

Employers are being checked for compliance with the Basic Conditions of Employment Act, sectoral determination, including the National Minimum Wage Act, Unemployment Insurance Act, and the Compensation for Occupational Injuries and Diseases Act.

The inspector-general said the mega-blitz inspections were also formed by various law enforcement teams “flooding” areas across Gauteng including Silverton and Midrand.

The national multi-stakeholder mega-blitz inspections started in late 2020 in the Eastern Cape. Gauteng is the eighth province under scrutiny, before the spotlight shifts to the Northern Cape.

On Monday, the department announced that it would be conducting week-long inspections of employers operating in the wholesale, retail and hospitality sectors, to check the level of compliance with labour legislation.

The department and the SAPS were incorporated in the mega blitz “to ensure that, all institutions like hotels, bed and breakfast facilities and restaurants are fully inspected”.

“So far, as the Department of Labour goes, what we look out for is to test compliance with the various basket of legislation that we enforce. If national statistics are anything to go by, we are not expecting great compliance levels. We haven’t found that there are great compliance in the past,” said Moiloa.

“So, we will be inspecting up until Thursday. On Friday, we have a session or seminar where we are going to sort of take stock but also take time to reflect with our stakeholders around the compliance in and around GP.”