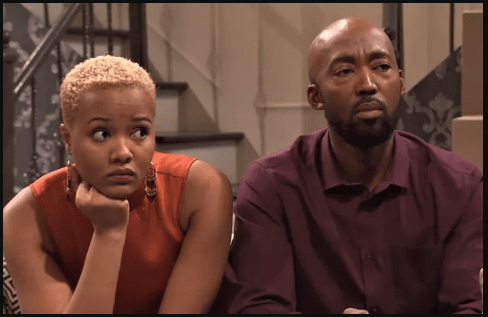 Is Muvhango’s Marang still battling with her role or is she just an Ice Queen?

In an emotional scene last night, the actress could barely shed a crocodile tear when she realised that she almost shot her fiancé, James Motsamai. In that scene, the actress is seen hiding her face with her hands because she couldn’t master a single tear and opted to hide her face till the director yelled cut to the next scene.

Marang almost shot James last night because she thought he was an intruder. She’s been suffering from PTSD (Post-traumatic stress disorder) since the burglary at MMC buildings and opted to buy a gun instead of seeing a psychologist.

It’s so typical of the show to cast only beautiful actresses: with the exception of Buhle Samuels who played Matshidiso who’s just exited the show for greener pastures. She was spectacular in Netflix’s Kings of Joburg!

Fans of the show have been complaining about Marang since she debuted and there’s still minimal improvement. She debuted the soapie with an American English accent, then toned down the English and spoke more Tswana, but kept the catwalk.

There are several actors on the show, who are given main roles but give the audience nothing to ring home about, which has resulted in the show losing millions of viewers throughout the years. Other characters include Mbali and the new Hulisani.

The current storyline: Marang will probably get back together with her ex-fiancé. KK Mulaudzi because her relationship with James Motsamai has been downhill since the burglary. She’s also been keeping a lot of secrets from James…she’s becoming as dangerous as Modiehi (James Motsamai’s ex-wife). Modiehi owned a gun and got along with KK! She’s messing up the relationship by spending time more time with KK.

“She can’t, she bores me to death but at the end of the day, she gets the money for whatever she’s doing on Muvhango.”

“I don’t know if it her as a person or her character on the show but something is off.”

“Marang can surely act, she is aware of the cameras and seems like she’s struggling, nothing is normal in her acting. If u look at her co-actors, u can see the difference between there acting and hers.”

“Wa zama mara role ya gage ya bhora. (She’s trying but her role is boring)”

She’s been compared to Tumi and Lindani from The River and Katlego Peterson and Cindy from Skeem Saam by fans.