2 years of tlof tlof you call it rape? – Jub Jub’s mom fumes; calls for a face to face with Amanda Du-Pont

2 years of tlof tlof you call it rape? – Jub Jub’s mom fumes; calls for a face to face with Amanda Du-Pont 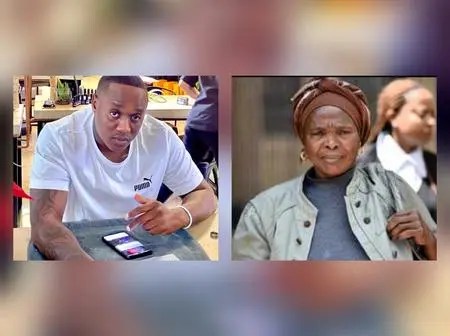 In an audio recording distributed on social media, Mama Jackie is heard questioning why the women did not report the rape when it happened.

“Amanda Du Pont forgot that Molemo helped her get into showbiz. Secondly, how do you stay for two years in a relationship where you are being raped? Why didn’t she open a case? When Molemo dumped her, she called me and told me that she is expecting twins. Where are the twins? I want to know where the twins are.

“She mustn’t act innocent and clean. The s.e.x she was having for two years, she calls the s.e.x she has been having for two-year, rape? Why did she stay (in the relationship), she had parents? Why couldn’t she report to her parents for them to stand up and open a case?” she asks.

Mama Jackie went on to address Masechaba’s alleged s.e.xual assault saying she needs to point out the room in her house where she was raped.

“The second one called Masechaba says she was raped in my house. She must describe my house inside. Ndiyamfuna, Ndiyayi funa leyo ntombazana (I want that girl). I want her. I want to question her. I wish her past [to] get exposed. Those who know her can expose her past.”

Speaking of the cousin who also made allegations against Jub Jub, Mama Jackie asked why she didn’t report the matter to the family.

“I also want the cousin. Why was she waiting for Amanda Du Pont to say she was raped before coming forward? I don’t recall arguing with any of my relatives because of Molemo raping their cousin. Why did she not report it to her parents so they can come to me?”

Mama Jackie says she needs to know when all the alleged rapes happened.

“When did they happen? Why didn’t they open a case? Masechaba must not disrespect me. I don’t know her from a bar of soap. She must describe my house and I will publish the pictures of how my house looks after she says which room she was raped in and the colour of the bed she was raped in. I want her.”

In a video statement shared on social media, Amanda says Jub Jub raped her and for two years straight and only left when he attempted to kill her.

“First of all, Molemo, you raped me. I was raped for two years solidly. So pleased don’t make it sound like it was a relationship. I was absolutely afraid to leave. I was afraid of the power that your mother had. I was aware of the stifling and sifting of money your mother did with Oprah and also what you guys did with muthi and medicine and made me believe my life would be in danger If I spoke up. You didn’t smash me, you forcefully opened my legs and forced yourself on me, numerous times for two years and made me believe I had no way out,” she says.

“In that time I had an abortion of course because there was absolutely no way to have a child that was forcefully given to me. And the most painful part about all of this is I was a virgin and I told Jub Jub I planned to be a virgin until I get married.”

Masehaba says she too was a victim of an alleged rape at the hands of Jub Jub.

“I believe Amanda Du Pont. Molemo Maarohanye (Jub Jub) raped me too. It happened in Mama Jackie’s house in Naturena. He was my boyfriend. I was a teenager. I was a v1rgin.”

Meanwhile Refilwe said, Jub Jub had made s.e.xual advances towards her in the workplace.

“I worked closely with Molemo Jub Jub at Moja Love TV and experienced many s.e.xual advances which were declined. His interview on MacG’s podcast was reckless and he deserves the backlash,” she says.

Meanwhile Jub Jub has issued a statement announcing that he will be laying charges of crimen injuria and defamation against two well-known female media personalities and his cousin for accusing him of rape.